Greatest Sci-Fi Artists of All Time Science Fiction is one of the most popular genres of all time. They open our hearts to the possibility of a new reality and incubate our brains with new ideas and concepts. The Sci-Fi genre encourages us to explore the world in new ways – enabling us to reimagine reality. As such, it is not surprising that most of the facilities that we enjoy today – be it robots or flying – were once created in someone’s imagination as a futuristic idea. The outlandish ideas presented in the Sci-Fi art forms push the boundaries of human imagination and inspire us to think differently from the accepted norm. They provide us with relief from the monotonous patterns of daily life. However, the genre is not possible without the pioneer artists who worked behind them. Here are some of the greatest Sci-Fi Artists of all time for your reference:

The renowned Swiss Painter and sculptor are best known for his work in the films Alien, Dune, and Poltergeist. He is quite popular for his style of art, uniquely known as biomechanical art – a combination of human physiques with machines. One of the most popular biomechanical arts created by H.R Giger is the creature Xenomorph. Giger’s work had a lasting impact on the Science Fiction genre, with many artists attempting to imitate his work characterized by disturbing nightmarish themes of death and decay. In addition to working on films, he has also worked alongside musicians, helping them to bring their visions into reality. Some of the popular albums covers he worked on include Black and Blue by Rolling Stone, Hallucinations by Atrocity, and Koo Koo by Debby Harry. 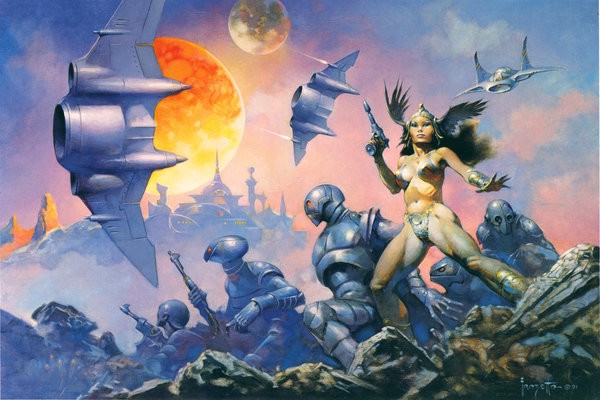 World-renowned Science fiction author Wayne Barlowe is popular for his debut novel Inferno. The book catapulted Wayne into commercial success and established him as a leading artist in the science fiction genre. Besides his literary work, he is also well known for his illustrations. He first gained attention for his illustrations with the book Expedition, which combined his literary skills with his own paintings and drawings. The publication was critically acclaimed for the realistic depictions of Martian life. He is also known for his work in some of the biggest blockbusters of Hollywood, such as Pacific Rim and Avatar. He continuously inspires artists working in the field of science fiction.

One cannot talk about science fiction artists without mentioning this famous name. Isaac Asimov is one of the most iconic and prolific science fiction writers of all time, his popular works being ‘I, Robot.’ His predictions on the impact of artificial intelligence on humanity have proved to be surprisingly accurate. The world of robots and the rules formulated by Isaac Asimov for the ethical coexistence of humans and robots has influenced all subsequent Sci-Fi genre literature. Isaac Asimov is also known for his other work, such as the Foundation Series and The End of Eternity.